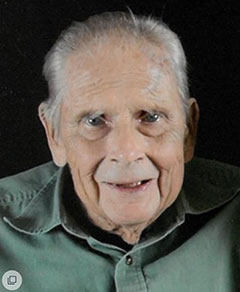 Dr. Walter Richard Hampton, 86, a brilliant and well-respected physician, passed away peacefully on December 8, 2020 at The New McLean in Simsbury under the loving care of the extraordinary team of staff there, including the Hospice Team. As one of the visionaries of McLean Home, and as its first Medical Director, Walter, in a sense, died “at home.”

Dr. Hampton was born on August 4, 1934 in Bronx, New York to Walter Joseph and Dorothy May (Schaefer) Hampton. He was an only child. Walter grew up in Yonkers, Westchester, New York. He graduated with a Bachelor of Science degree from Yale University in 1956. He attended the State University of New York Downstate Medical Center College of Medicine, Class of 1959. Walter completed his medical internship and residency in internal medicine at Dartmouth-Hitchcock Medical Center in New Hampshire, and brought his talents, skills, and commitment to Hartford Hospital in 1961. He worked tirelessly to establish an esteemed private practice in family medicine in Simsbury, Connecticut where he delivered outstanding medical care to generations of Simsbury residents.

Walter was a remarkable diagnostician and an overall highly regarded physician. Walter spent some time conducting research at George Washington University in Washington, D.C. where he met an equally incredible woman, Mary Ruth Kennedy, from New Haven, Connecticut. They married on June 16, 1956. They resided in Brooklyn before moving to Fort Slocum, New York where Walter obtained rank as a Captain and physician in the United States Army. After his residency at Dartmouth, Walter and Mary moved to Connecticut, and found their beloved home on Winthrop Street in Tariffville where they spent over fifty years of their lives. They were dedicated parishioners of Saint Bernard’s Church. They provided a warm and welcoming home to their seven children; and that home became a cozy sanctuary of love and comfort to countless numbers of people – children, grandchildren, great-grandchildren, neighbors and friends – throughout the decades.

Walter made Christmases particularly memorable. “Christmas tree day” was sacred in the Hampton home. Each year, Walter and Mary took their brood searching for the largest and most misshapen Christmas tree that Walter would miraculously stuff through the front door. Few people who have visited the Hampton Homestead especially during the Christmas season could argue that Walter and Mary provided the most chaotic but joyful refuge from the world. In his youth, Walter earned Eagle Scout rank with Boy Scouts of America. From a young age, Walter was an avid outdoorsman, and he instilled in his children a love of nature and all its gifts.

He was most passionate about the mountains, and gave his children endless hiking and camping adventures in the Berkshires, the Adirondacks, the Green Mountains, the White Mountains, and in a tiny “oasis” on Newfound Lake in New Hampshire called Camp Wulamat. Ever a thrill-seeker, Walter organized several treks throughout the Himalayas in Nepal, making it to the base camp of Mount Everest, taking his wife and many of his kids with him. Walter showed his children that the world is a big and exciting place, and instilled in his family a sense of adventure, a passion for discovery, and a sense of social responsibility. Walter was also a gardener, and in the summer, could often be seen tending to abundant and seemingly endless crops of asparagus and other fruits and vegetables. He had an overall tremendous respect for nature, and was a wonderful steward and guardian of the Earth. Even while living at McLean, Walter kept a watchful eye on the squirrels and the birds. Walter was a strong athlete. He was a competitive swimmer in his youth, as well as a fantastic downhill and cross-country skier, rock climber, ice climber, and runner. Walter was a pioneer, always trying new things like windsurfing, long before they became trendy and popular. Walter did not hesitate to introduce his children to his passions, getting his kids on skis at age two, or getting his grandchildren on to his homemade rock wall in his backyard! Among his many accomplishments, Walter had been selected, and acted as, a Ski Patrol for the 1980 Winter Olympics in Lake Placid, New York.

He was also a proud member of the Ragged Mountain Foundation, dedicated to preserving iconic places for climbing and hiking in Connecticut. Walter was an astronomer and member of the AAVSO (American Association of Variable Star Observers), a voracious reader, and a wonderful cook. He was a visionary and enthusiast for all-things science, and was behind the inception of the Talcott Mountain Science Center. One of Walter’s happiest places was his backyard observatory on a clear, cold night. He loved dogs, and could often be found sitting by his hearth with a medical journal, a dog by his side, and a good gin-and-tonic! He appreciated Classical music and enjoyed summer evenings at Tanglewood. He loved Star Wars trilogies and science fiction! Most important, Walter was a loving husband, father, grandfather and great-grandfather.

He is survived by his seven children: Walter Richard Hampton, Jr., and his wife Ann (Sheybani), of Castletownshend, Cork, Ireland, Maria Lucy (Hampton) Klimczak and her husband, Walter, of Collinsville, Dr. Christopher Kennedy Hampton and his wife Rene (Davis), of Roselle, New Jersey, Dr. Thomas Gerard Hampton and his wife Jeanne (Smith), of Framingham, Massachusetts, Alison (Hampton) Bigman and her husband Jay of South Windsor, Representative John Kennedy Hampton of Simsbury, and Mary (Hampton) Sirianni and her husband Scott of Simsbury. Walter leaves behind twenty grandchildren: Maria Rose Hampton, W. Joseph Hampton and his beloved wife, Rachel, Zachary Hampton, and sweet wife, Sarah, Luke Hampton, Frances Klimczak, Walter Klimczak, Joseph Klimczak, Dr. Christopher Hampton, Patrick Hampton, Gerard Hampton, Bridget Hampton, Cecelia Hampton, Emma Catherine Hampton, T. Smith Hampton, Lyla Hampton, Sean Lemkey, Isabelle Nadeau, Venezia Sirianni, Giuliano Sirianni, and Viviana Sirianni; step-grandchildren: Matthew and Maile Bigman and Grant Bigman, Iman Sheybani and her husband and family, and Amir Sheybani; and great grandchildren: Joseph and Julia Hampton and all of whom he was tremendously proud. Walter is also survived by a sister-in-law, Nana Kennedy, of Omena, Michigan, as well as several nieces and nephews and extended family across the country. He also leaves behind a loyal group of climbing friends who have never forgotten his fortitude, as well as his “family” at The New McLean. Walter was well-loved. His influence and legacy reach far and wide. He was a remarkable man – humble, generous, and kind – who has left an indelible mark upon the world, and his contributions to society will never be forgotten.

In lieu of flowers, contributions in Walter’s memory can be made to The New McLean, 75 Great Pond Road, Simsbury, Connecticut 06070, and/or to Talcott Mountain Science Center & Academy, 324 Montevideo Road, Avon, Connecticut, 06001.