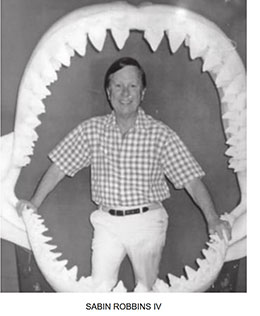 Sabin Robbins IV said he’d be famous for two things: being the first boyfriend of Jane Fonda (they remained good friends); and father-in-law of NBC newscaster David Brinkley as he was the stand-in father of the bride at his marriage in 1972.

Author, lecturer, and naturalist, Robbins was born August 4, 1933 in Cincinnati to Happy and Sabin Robbins III and grew up in the “wilds” of Indian Hill. His pets included a raccoon, crow, and seagull.

An All-American swimmer, he was a high honors graduate at Lawrenceville School, Yale, and an Oxford scholar.

His professional career included Intelligence Research Specialist at the State Department, writer- editor at National Geographic, a Director at the National Zoo and American Association of Zoos & Aquariums. He led safaris around the world tracking tigers by elephant-back, photographing gorillas making love, tickling the tongues of whales, charming cobras, and swimming with sharks and piranhas.

In retirement, Robbins was a popular ship lecturer on more than 100 cruises from Australia to Zanzibar and 70 countries in between.

Robbins authored numerous articles and books including “See America Free,” “A Hundred Summers,” “Amazing Wonders of the Oceans,” and his biography, “A Life of Fun, Romance and Wild Adventures.”

He is survived by his sister, Ruthie Price of Cincinnati; two sons, Rob of Jacksonville and Will of Seattle; and three grandchildren, Tyler, Alexis, and Alison Robbins of Jacksonville.

His legacy lives on in the books he authored, the popular cruise ship lectures he gave, the causes he championed, and the hearts of family and friends who loved him.