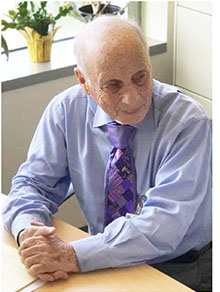 Robert E. Kleiger, MD, a noted, longtime electrophysiologist in the Cardiovascular Division at Washington University School of Medicine in St. Louis, died of prostate cancer Jan. 21, 2022, at his home in St. Louis. He was 87.

Kleiger, a professor of medicine, was a cardiologist widely known for his deep expertise in electrocardiography, the measurement and analysis of the electrical activity of the heart. A textbook he co-wrote on the subject, “Clinical Scalar Electrocardiography,” was first published in 1972 and is still in use today. He was also a dedicated teacher and mentor to students, residents, fellows and faculty. In recognition of his outstanding teaching and training, he received the Benico Barzilai Teaching Award from the cardiology fellowship program in 2021.

“We are deeply saddened by the loss of our distinguished colleague, Dr.Robert Kleiger,” said Victoria J. Fraser, MD, the Adolphus Busch Professor of Medicine and head of the Department of Medicine. “His legacy willcontinue in the countless students, residents and fellows that he taught over his long and outstanding career, as well as in the body of knowledgethat he developed and published to share his detailed understanding of electrocardiography.”

Kleiger helped establish cardiovascular care at what was then Jewish Hospital. He joined the School of Medicine faculty in 1969 and, at Jewish Hospital, served as director of the heart station, the medical intensive careunit and the graphics laboratory. He was acting chief of the Division of Cardiology at the hospital from 1981 to 1985.

Kleiger’s first published study, in a 1961 issue of the Journal of the American Medical Association, described the initial use of electric counter-shock for the treatment of ventricular tachycardia, a life-threatening arrhythmia. Heavily involved in clinical research, Kleiger also served as the site principal investigator or the electrocardiography consultant for numerous clinical trials.

Originally from Brooklyn, N.Y., Kleiger earned his bachelor’s degree from Yale University in 1956 and his medical degree from Harvard Medical School in 1960. He completed an internship at the Peter Bent Brigham Hospital in Boston in 1961 and continued his training with a residency in internal medicine at Barnes Hospital in 1963. He then went on to complete two fellowships in cardiology — at Harvard School of Public Health in 1965 and Stanford University School of Medicine in 1969.

Through his philanthropic contributions to the Cardiovascular Division, the Robert E. Kleiger, MD Endowment in Cardiology recently was established. The endowment will be used to support the division and anannual lectureship in his honor.

Beyond his distinguished career, Kleiger was an avid bird watcher and photographer, interests he pursued on his many travels, including to Antarctica and the Gobi Desert.

He is survived by his nieces, Susan Kushner and Nancy Wasserman; their spouses and their children.

A service was held Jan. 28 at Knollwood Park Cemetery in Ridgewood,N.Y. The Cardiovascular Division also will hold a memorial service, at a date to be announced.