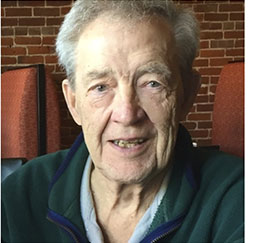 The world has lost one of the good ones. James Burney Tuggle passed away peacefully on December 30, 2021 at Aegis Callahan in Shoreline from complications of a liposarcoma. Jim, to his friends, was the epitome of an Old-World Gentleman; handsome, well-educated, kind, gentle, with a wry sense of humor and just the right dash of bravado. His was a long, rich life full of love, laughter, and adventure.

Jim was born in Los Angeles, CA on February 24, 1932 to George Bushnell and Nancy Burney Tuggle. His formative years were spent in Redlands, CA and Virginia. After WWII, his family moved to Honolulu, HI where Jim attended Punahou School. He excelled in academics, was class president, and captain of the baseball team. After graduation in 1950, he attended Yale University where he was a member of Beta Fraternity and Berzelius. Mid-college career, Jim decided he needed inspiration and enlisted in the US Navy in 1952. He was stationed out of Bremerton, WA as a Corpsman during the Korean Conflict. During his time in Bremerton he met his love match, Joyce Fowler, and the two were married in Seattle on July 7, 1956. Jim then received his MBA from Stanford University in 1958 and therein embarked on a career that would take him and his family on a thrilling crisscross journey across the United States. His professional career culminated with a consulting partnership with Arthur Young & Co. (now Ernst & Young). Along the way, Jim enhanced his work life with community service and global travels. Some of his extracurricular activities included Little League baseball coach, President Babe Ruth Baseball, President Chautauqua NW Association, and board member for the city of Clyde Hill in Bellevue. He was also an avid golfer, hiker, and wine connoisseur.

Later in life, Jim and Joyce enjoyed the expat life for two years in Kuala Lumpur, Malaysia working for Lim Ali & Associates. He also consulted briefly in Tbilisi, Georgia. It was while living in Asia that Jim acquired his love of Asian art. He and Joyce collected numerous antique art pieces while abroad, which, combined with his appreciation of Northwest artists, resulted in an admirable collection of artworks. Jim was predeceased by his wife in 2014 and leaves behind three children; James Tuggle, Kim (Tuggle) Helland, Susan (Tuggle) Van Wyhe, and seven grandchildren – Collin, Sam, Alex, Garrett, Derek, Siena, Aden.

As he was the glue to our family fabric, he will be deeply missed. As dad always liked to say, “see you next time”.
Much gratitude to Kline Galland for their compassion and guidance. In lieu of flowers, please consider making a donation to The Seattle Symphony, Seattle Art Museum, or MONA in La Conner, as all meant a great deal to Jim and Joyce.