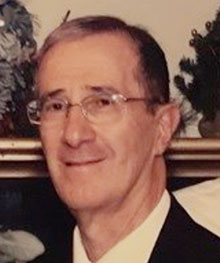 Dr. Gerald Nicholas Cimmino, beloved husband, father, grandfather and great-grandfather passed away after a long illness on August 2 at his home in Fairfield, CT surrounded by his family. He was born on June 30, 1934 in New Haven, CT. He was married to his high school sweetheart, Dona, who lovingly cared for him throughout his illness. Jerry was a graduate of Yale University and Yale Medical School. He later practiced ophthalmology and was Chief of Ophthalmology at Griffin Hospital in Derby. Early in his career he practiced ophthalmology as an Air Force Captain in San Antonio, TX. Notwithstanding his professional successes, he considered his family his greatest accomplishment. In addition to his wife of 62 years, Dona, he leaves behind an extensive family including his brother Nicholas Cimmino, his five children Jerry Cimmino (Mindy), Cheryl Clarizio (Tony), Laura Sachs (Peter), Michael Cimmino (Sheila) and Richard Cimmino (Ann); 14 grandchildren Jeffrey Cimmino (Annie), Delaina Cimmino, Matthew Clarizio (Jillian), Jamie Clarizio (Andrea), Kristina Clarizio, Eric Mishchenko-Sachs (Nadia), Todd Sachs, Eva Sachs, Katelyn Cimmino, Chris Cimmino, Emily Cimmino, Ryan Cimmino, Katie Cimmino and Andrew Cimmino; 3 great-grandchildren Sofia Clarizio, Giavanna Clarizio and Corey Clarizio.

As a young father, Jerry was actively involved with his sons participation in the Woodbridge Fathers Baseball League as one of the league founders, baseball coach and occasional umpire. He was also an avid tennis player and enjoyed many hours of competitive play with his family. After retirement, he took up golf, cross country skiing and hiking. He and Dona traveled throughout the United States and the world, but his most memorable trips were annual vacations to Cape Cod, MA with all of his children and grandchildren. Jerry was well read and passionate about religion, politics, music, and sports (particularly UCONN athletics and the Yankees) and always welcomed spirited conversation on any of these topics.

The family will receive friends from 4:00 – 7:00 p.m. on Thursday, August 5 at Redgate-Hennessy Funeral Directors, Main Street and Gorham Place, Trumbull, CT. A Mass of Christian burial will be celebrated at 10:00 a.m. on Friday, August 6 meeting directly in Our Lady of the Assumption Church, 545 Stratfield Rd., Fairfield, CT. Interment with Full Military Honors to follow at St. Lawrence Cemetery in West Haven, CT.

In lieu of flowers, friends may make memorial contributions to the The Michael J. Fox Foundation for Parkinson’s Research.