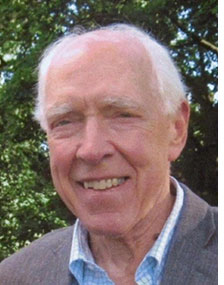 Charles Wilson “Pete” Runnette III of New Canaan, CT, a former airline executive who turned his lifelong passion for airplanes and connecting the world into his career, passed away on August 13th, 2022, surrounded by family.

Pete, 87, was born in Pittsburgh, PA, to Margaret Forrester Runnette and Charles Wilson Runnette Jr. He came of age during WWII and loved the Saturday matinee newsreels showing stories from around the world. Once he graduated from Shady Side Academy, he got an NROTC scholarship to study at Yale University.

After graduation, he served as a Navy pilot, flying his beloved P2V-7 Neptune aircraft from the Naval Air Station at Whidbey Island, WA, Iwakuni, Japan, and Adak/Kodiak, AK. Pete made many of his lifelong friends during that time, and sparked a lifelong passion for the forests of the PNW, Alaska and Japan.

Following his Navy service, Pete went to law school at UC Berkeley where he met undergraduate Alice Catherine Land of Piedmont, CA, whom he married in 1962. Alice, his wife of more than 60 years, and mother of his two children, survives him.

Pete got his first aviation-related job as a lawyer at the FAA which brought him to Washington DC. After two years he landed a new position in New York at the company he long dreamed of working for: Pan American World Airways.

Within a few years he was made staff VP, moving from flight operations at JFK to the executive floors of the Pan Am Building. That brought Pete and Alice to their first home in New Canaan on Seminary Street: an easy commute into his office right above Grand Central.

In 1972, Pete took on the role as the GM of Pan Am’s Internal German Service in West Berlin. He managed this small airline within an airline with a base of over 100 Pan Am pilots flying 727s between allied-occupied West Berlin and West Germany.

In 1980 Pete was named VP of Pan Am’s Atlantic Division. Based in London, he was responsible for all Pan Am routes across Europe, the Middle East, Africa and the Indian Subcontinent. He deeply believed in the benefits of travel in connecting Americans with people around the world.

Pete would often say he was lucky to have some of the best jobs in the world, and even luckier that made some great friends in each one. When Pete finally decided to leave his beloved Pan Am, it was to run the International Division for Continental Airlines in early 1988.

After Pete retired he served as President of the Pan Am Historical Foundation for over 20 years, working closely with CEO Ed Trippe, son of Pan Am founder Juan Trippe. One of his proudest recent accomplishments was shepherding a documentary series about Pan Am’s China Clipper, Across the Pacific, which first aired on PBS in 2020.

Pete loved New Canaan and could be spotted in past decades walking around Irwin Park or the Nature Center. He served as a President of the UN Committee of New Canaan, a member of the World Affairs Forum in Stamford, and the New Canaan Roundtable. He was also a very enthusiastic member of the Field Club and a fixture of its tennis courts.

Pete will be remembered for his sense of fun, his love of books & movies, his kindness & decency, and his talent for making lifelong friends wherever he landed.

He is survived (and sorely missed) by his wife, Alice Runnette, his daughter Brooke (Max Culhane), son Charles (Nathan Lump), his granddaughter Lilou Runnette Culhane, his sister Ann Runnette Piper (Tom Piper), and many wonderful friends in New Canaan and all over the world.

A memorial service to celebrate Pete’s life will be held at a future date.