NewYork-Presbyterian Hospital is deeply saddened by the loss of a dear friend and benefactor, S. Parker Gilbert III. A former Chairman of Morgan Stanley Group Inc., Mr. Gilbert was a visionary leader whose generosity has made a tremendous impact on our institution. With his wife Gail, he was an early and dedicated supporter of two signature projects at the Hospital, both bearing the Morgan Stanley name — the Morgan Stanley Children’s Hospital of NewYork-Presbyterian/Columbia University Medical Center and the soon-to-be-completed Morgan Stanley Adult Emergency Department at NewYork-Presbyterian/Columbia. His philanthropic efforts have touched the lives of thousands of patients and will continue to serve those in need for many years to come. We offer our most sincere condolences to his wife Gail, their three children Lynn, Parker and David, and all of his family and loved ones. 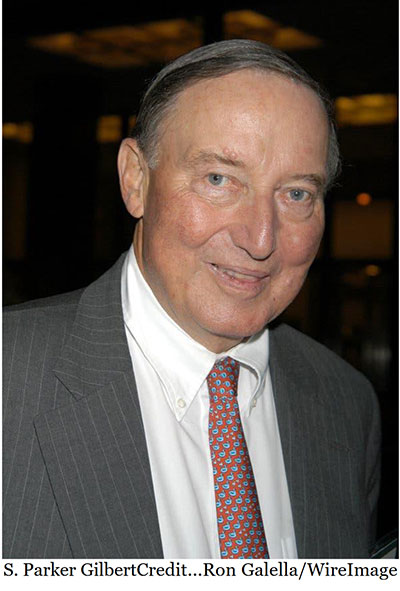 By Landon Thomas Jr. for The New York Times

S. Parker Gilbert, a former chairman of Morgan Stanley who led its public stock offering in 1986 and organized a management revolt at that storied investment house 20 years later, died on Wednesday in Manhattan. He was 81.

His son Parker said that Mr. Gilbert had been treated for chronic obstructive pulmonary disease for years and that he died at NewYork-Presbyterian Hospital.

S. Parker Gilbert was a stepson and a godson of Morgan Stanley’s founders, and he came of age on Wall Street when family name and pedigree were often enough to land one a job at the elite partnerships of the day, like Morgan Stanley and Goldman Sachs.

But he also played a role in exploding this cozy world when he united a divided body of Morgan Stanley bankers behind the idea that the firm could grow and prosper only if it sold shares to the public.

That move, and the subsequent pressures that the business faced as a public company, led to Morgan Stanley’s merger in 1997 with the retail brokerage firm Dean Witter. And when Philip J. Purcell, a former management consultant who had little patience for the egos and attitudes of the company’s investment bankers, took swift control of it, the stage was set for Mr. Gilbert — who was then deep in retirement — to alter his company’s destiny again.

In 2005, he lent his name, reputation and finances to a searing guerrilla war (albeit one that had as its headquarters the study in his Fifth Avenue apartment) that eventually forced Mr. Purcell from power on the assertion that his more conservative financial approach was ruining Morgan Stanley’s vaunted culture.

“Parker was the heart and soul of Morgan Stanley,” said Anson M. Beard Jr., a childhood friend and colleague who was also a member of a group of eight retired Morgan Stanley bankers who led the fight against Mr. Purcell. “He was born into the firm, became C.E.O., retired and then brought about a change in leadership. He was the firm’s DNA.”

Mr. Beard remembered calling Mr. Gilbert in January 2005 to grouse that the company they loved was changing for the worse under Mr. Purcell. Mr. Beard told Mr. Gilbert that they had to do something.

“His response was, ‘Come over to my apartment,’ ” Mr. Beard recalled. Two months later, he said, they sent a letter to Mr. Purcell challenging his leadership. “He knew how to build consensus and get things done,” Mr. Beard said. “This never would have happened without Parker.”

Such was Mr. Gilbert’s belief in Morgan Stanley that even when it seemed that the company could follow Lehman Brothers and go bankrupt during the financial crisis, he consistently bought shares in it, even as the stock value sank to single digits. John J. Mack, who succeeded Mr. Purcell as chief executive in 2005, said of Mr. Gilbert in an interview: “I would call him every few days during the crisis — I mean, he was such a big part of Morgan Stanley, I just wanted him to know what was going on. We were really stressed in those days, but every time I got off the phone with him, I would feel so much better.”

Seymour Parker Gilbert III (who never used the Roman numerals) was born in New York City on Nov. 15, 1933. His father was a financial wunderkind of sorts who in the years after World War I played a critical role for the United States government in the negotiations over German war reparations.

Mr. Gilbert’s father died at 45, and his mother later married Harold Stanley, who after the split with J. P. Morgan became the first president of Morgan Stanley. Mr. Gilbert’s godfather was the firm’s other founder, Henry S. Morgan.

Mr. Gilbert was educated at the Buckley School, Hotchkiss and Yale. After a stint in the Army, he joined Morgan Stanley in 1960 and was elected partner in 1969.

Working primarily as a corporate banker, Mr. Gilbert was appointed to lead the firm in 1984 at 49.

At the time, Wall Street competitors like Merrill Lynch and Bear Stearns had already gone public, and Mr. Gilbert was facing mounting pressure from the firm’s younger bankers for Morgan Stanley to do the same to compete on larger, more lucrative banking deals.

Older partners feared that such a move would have a disastrous effect on the firm’s culture.

Mr. Gilbert was ultimately able to make the case that going public was the right thing to do, and the firm did so in 1986.

He retired in 1990 and devoted time and money to the Morgan Library and Museum, which he led from 1988 to 2011. He was also a longtime trustee of the Metropolitan Museum of Art.

Mr. Gilbert lived in Manhattan. In addition to his son S. Parker Jr., known as Parker, he is survived by his wife, Gail; a daughter, Lynn Tudor; another son, David, a novelist; and eight grandchildren.

About a year ago, Mr. Gilbert made a rare trip to Morgan Stanley to give a speech to the company’s managing directors.

As was his style, his talk was brief but carried a powerful punch: Morgan Stanley’s culture was back, he said, a person who attended the event recalled.

The standing ovation lasted longer than Mr. Gilbert’s remarks, this person said: about four minutes, with a number of bankers shedding a tear or two.

Correction:
May 29, 2015
An earlier version of this obituary gave an incorrect date for Mr. Gilbert’s retirement from Morgan Stanley. He retired in 1990, not 1989.