In Memory of Roger Englander

It is with great sadness that I relate the passing of Roger William Englander, who died peacefully on Saturday, May 30, 2020 at the age of 85.

Despite my being a fellow Spizzwink and Yale Glee Club alumnus, I did not get to know Roger until the mid-80s, when I joined the University Glee Club of New York City – and my introduction was not to Englander the person but to Englander the voice! He was every choral conductor’s dream first tenor: clear, beautifully lyrical, and, despite being a yodeler, the consummate gentleman. We became lifelong friends, small-grouped together, won quartet contests together, reuned together, and, well, did all the things we expect out of Yalies who love to sing.

And how delightful it was to have him elected to the ’57 Whiffenpoofs shortly after he sang as their 50th reunion guest – it was truly one of the great moments of his life.

The magic of Roger’s singing will be with me always. 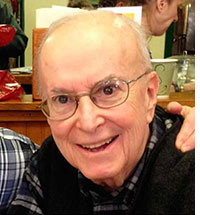 A graduate of Mamaroneck High School, Yale University and Harvard Business School, Mr. Englander went on to have a career on Wall Street as a highly successful institutional stockbroker.

His family said he was an “exceptional” family man and “a constant source of love and support” to both his nuclear and extended families. Yearly family trips to Cape Cod were a source of many happy memories for more than 30 years starting in 1980.

Next to his passion for family, music was central to Mr. Englander’s life. He was blessed with a beautiful first tenor voice that was often referred to as “the voice of an angel,” said his family. His singing spanned seven decades and included the Yale Glee Club, the Yale Spizzwinks, the Yale Whiffenpoofs, the University Glee Club (UGC) of New York City, and an a cappella offshoot of the UGC, “The Ten.”

Mr. Englander’s kindness, generosity, leadership and wisdom made him a hero to many and he will be sorely missed, his family said, but “his memories will live on through those who were blessed to know him and through the music we so gratefully have recorded for posterity.”

He is survived by his wife of 63 years, Simone; his sons, Rick, Bob and John; his daughters-in-law, Gina and Nina; and his grandchildren, Benjamin, Tessa, Shane and Abraham. Due to COVID-19, a small family funeral was held at graveside Monday, June 1. A time to suitably celebrate his life will be scheduled in the near future. In lieu of flowers, donations in his memory may be made to the American Kidney Fund at www.kidneyfund.org