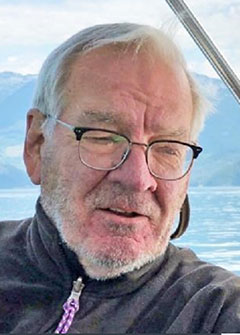 Just a few days before Peter was born in Glasgow, Montana on December 10, 1936 the first issue of Life Magazine was published. It featured a cover photo of the Fort Peck Dam. Peter’s father was in the Army Corps of Engineers working on that project, which is how Peter happened to be born in Montana, where he joined his parents and an older brother. When the project was completed, the family returned to Portland, Oregon and there, a second brother was born. Two years later, Peter’s father accepted the first of several assignments to Corps of Engineers projects in Morocco, Pakistan and Turkey. His parents and younger brother were out of the country for 10 years. Peter stayed in the U.S., attended Yale University, spent three summer breaks in Morocco, and graduated with a degree in Civil Engineering. Back on the West Coast, Peter worked as a civil engineer in Oregon, Washington, and Alaska, before deciding civil engineering was not what he wanted to do for the rest of his life. He moved in with his older brother in New York City until he found a job with IBM. That began his lifelong love of and work with computers.

It was also the beginning of a lifelong love in his personal life. While working for IBM in Poughkeepsie, NY he met his future wife, Martha Whiteside, then working at Cape Canaveral, Florida. They both transferred with IBM to Atlanta and were married in 1964. After a short stay in Martha’s home state of Georgia, they transferred again, this time to San Francisco, where Peter worked on a project converting Southern Pacific Railroad from accounting equipment to IBM’s then-largest and most powerful computer. Peter and Martha’s two children were born in San Francisco. The out of doors, particularly camping and backpacking in the mountains of California, Oregon, Idaho and Montana, provided wonderful family time together. Yellowstone and the high country of Yosemite afforded opportunity for Peter’s great enjoyment of fly fishing. In 1970 they moved to Greenbrae, California to what they considered the most wonderful neighborhood one could imagine friendly couples their age with children the ages of theirs.

Peter’s fascination with computers never diminished, although the computer changed from a room-size behemoth to tiny circuit boards. His professional life was always computer-related, and he also shared that expertise in his volunteer work. Peter provided technical assistance and refurbished computers to donate to the Canal Alliance in San Rafael, and more recently assisted a friend with technical guidance in expanding the school she founded for orphaned or abandoned girls in her home country of Uganda. After retirement he and Martha bought an off-the-grid cabin on Stuart Island, BC, Canada, and his skill with computers served them well connecting the cabin to the outside world. They spent summers there and while making many new friends, they enjoyed visits from old friends and family, especially the annual visit of their children and four grandchildren. Unfortunately, COVID-19 prevented what would have been Peter’s last summer in British Columbia.

During his last months, he communicated with many of the friends he had made during his 84 years. He succumbed to Pulmonary Fibrosis on December 28, 2020 but left with no regrets and no fear. Peter is survived by Martha, his wife of 56 years; his brothers, Holly of St. Louis and Walker of Oakland; and his children and grandchildren, who all live in San Francisco: son Christopher and his wife, Holly, and their three children, Scarlett, Walker, and Reed; and daughter Sarah and her husband, David Serrano Sewell, and their daughter, Clara. Memorial donations may be made to Voluntary Hearts Community for Girl-Child Concern at: https://www.voluntaryheartscommunity.org/contact.