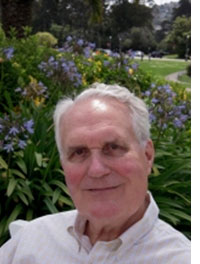 Mark Thoman, an over forty-year resident of Glen Ridge, passed away from a stroke on May 24, 2022. He died peacefully in hospice in Mountainside Hospital at 87. He had endured seventeen years of a progressive muscle weakness and two previous strokes from which he had managed to battle back. His determination served him well his entire life.

Born in Cincinnati, Ohio, to Valeska Wurlitzer and Henry A. Thoman, Mark Thoman grew up with an older sister and two older brothers, all of whom predeceased him. An older brother held a collegiate swimming record at Yale University, and later Mark was recruited for the Yale swim team. Although he earned a prize for a Senior history paper at Yale, but decided to become a lawyer after graduation. He wanted to go to Harvard Law and did.

Mark Thoman was a partner with Lord Day & Lord, Bond Disclosure Counsel, to New York City, for most of his legal career. When New York City’s fiscal crisis hit in the mid-1970s, Mr. Thoman was part of a team that worked relentlessly with the City’s lawyers and other experts to save the City from bankruptcy. His patience and dedication to the project earned him the respect of his peers, and he worked closely with Mayors Beame, Koch, and Dinkins over many years. At Lord Day & Lord, he also patiently mentored many future lawyers and CEOs.

Mr. Thoman was also interested in Eastern medicine. He had experienced acupuncture and thought it an excellent adjunct to Western medicine. He was upset to learn that in places in the US, some members of the AMA baited acupuncturists by sending in people who listened for words like “healer, patient, or doctor,” any of which at the time could result in the acupuncturist being arrested and thrown into jail. He contributed many pro bono hours in keeping them out of jail. The American Association of Oriental Medicine (now the AAAOM) presented him with an award for his many years of service.

Mark Thoman leaves behind his wife of forty years, Nancy Flaun Green, an art historian, a son George from a previous marriage, and a grandson James, and extended family members. A Memorial Service will be held in the future. Arrangements by the O’Boyle Funeral Home 309. Broad St. Bloomfield, NJ.