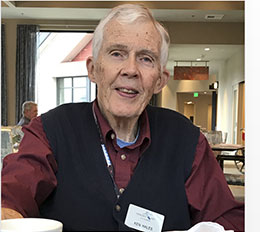 On October 27, 2021, Kenneth Adair Hales, wonderful father, grandfather, brother, and friend passed away at the age of 86. Ken was born on December 15, 1934 in the Bronx in New York City to Kenneth & Jean Hales.

In his youth, Ken had many great experiences in Scouting, especially a trip to Philmont Scout Ranch. Between 1956 and 1966 Ken received a bachelor’s degree from Yale, a master’s degree from MIT, and a PhD from Stanford. While obtaining these degrees he worked for Shell in the oil fields of Texas and traveled through Mexico and Europe. In 1958 he met and within 6 months married Florence Thress of Middletown, Ohio. In 1961 they had a son Bradley Graham (Hales) and in 1964 a daughter, Gillian Adair (Hansen). In 1965 a daughter Pamela Kelley (Kirkpatrick) was born to complete the family.

Ken enjoyed his years of work with GE, TRW, Boeing, and Unisys where he worked on many interesting projects. He retired in 2000 and moved to Washington to be near his daughter Gillian and first 3 grandchildren (Kendra ‘93, Casey ’96 & Kori ’98 Hansen). By 2003 four more grandchildren joined the family (Summer ’00 & Skylar ’01 Hales and Fiona ’01 & Leland ‘03 Kirkpatrick). In 2019 Pamela Kirkpatrick succumbed to cancer after a seven-year fight.

Ken and Flo spent 56 happy years together until her passing in 2015. They moved 15 times during their marriage, from the East Coast to the West Coast and the reverse several times. Ken had been to all 50 states. They loved traveling – especially to Europe where they loved visiting museums, seeing the beautiful landscape, and tasting the local fare.

Ken loved spending time with his family, passing on his knowledge and enthusiasm to his children and grandchildren. He took his family on many Sierra Club trips, camping, backpacking, skiing and scuba diving adventures. He spent many years refereeing countless youth soccer games. Ken had a passion for running, photography, and technology. He also shared his competitive nature by playing many card and board games. Ken spent his last four years thriving in Heron’s Key senior living community where he enjoyed making many great friends. He loved sharing his passions with others and never lost his desire to learn new things. This combination culminated with him personally publishing his life story, “Born in the Bronx” which highlights many of his life’s amazing adventures.

Ken’s love for the outdoors started as he attained the title of Eagle Scout in the Boy Scouts and continued throughout his life. This passion and Ken’s giving nature can be honored by those wishing to make memorial donations to the Sierra Club Foundation, or to the charity of their choosing. In tribute to his love for technology his family is planning a virtual celebration of Ken’s life to be held on his birthday.