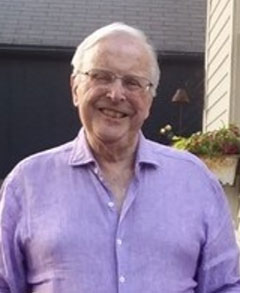 James Marshall Rae, long-time New Canaan resident, died peacefully on December 15, 2021. Jim was born in Eugene, Oregon to Colonel and Mrs. John Marshall Rae. He was predeceased by his twin brother John and younger brother Bruce. He was 88.
Jim began his education at Shady Side Academy in Pittsburgh. He then attended Phillips Exeter Academy and received a full scholarship to Yale University. As a Bulldog, Jim swam under the leadership of Coach “Bob” Kiphuth, was selected as an All-American swimmer, and qualified for the Pan American Games. He was also a member of Fence Club, played lacrosse, and graduated with honors in 1959.

After graduating from Harvard Law School, Jim went on to practice law in New York City. Specializing in international corporate law, he developed an expertise in the Middle East, and his work took him around the world, from London and Beirut to Doha and Riyadh. Jim was an active member of St. Mark’s Episcopal Church, New Canaan Field Club, the Country Club of New Canaan, and The Yale Club of New York City. In recent years, he was a passionate member of Christ Episcopal Church in Guilford and Guilford Yacht Club. Jim was an avid gardener and enjoyed squash, tennis, and golf. Jim is survived by his wife Ann Rippin Rae, his children, and grandchildren.
Services will be private. Any donations to either St. Marks Church, 111 Oenoke Ridge, New Canaan, CT 06840 or Christ Church, 11 Park St, Guilford, CT 06437 would honor his memory. Arrangements in care of the Guilford Funeral Home, 115 Church St, Guilford.