My senior year JE roommate Joel Daly has passed on, joining Roger Englander who left us a bit earlier, and leaving Bob Garlock and me to carry on (a picture of the 4 of us with our diplomas on commencement day 1956 is inserted below).

Here is a link to Joel’s extraordinary obit in the Chicago Sun-Times: (click here)

Joel “taught me to yodel,” though he was always the master yodeler. He and I put on “The War of the Worlds” on YBC with a cast from the Dramat. He recruited me to join him in a weekly comedy spot on WYBC. We alternated writing the silly scripts, and called ourselves (in a tribute to Bob Elliot and Ray Goulding’s “Bob and Ray” show) “The Boob and Roy Show,” which we introduced by singing the silly jingle “We Are the Joy Boys of Radio,” with Joel doing impossible harmonies (Roger once exclaimed of Joel’s harmonization in that song, when we were listening to one of the shows on the radio, “Joe, that was a minor 7th!”). Joel’s wit was quick, his knowledge deep, his capacity for work astonishing, his perseverance exemplary and his joy in life contagious. I was privileged to know him. 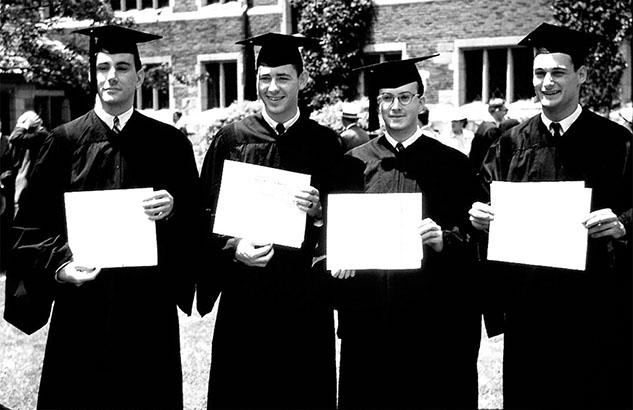